Home Spotlight Blockchain Has Great Promise, but It’s Not the Holy Grail for Fraud...
inplace-infolinks

By Mark Pearlstein, CRO at DoubleVerify

The irony was that the higher Bitcoin’s price rose, the less suited it became for its putative mission: to serve as a currency.

Similarly, as we cruise into 2019, there is lots of hype around the use of blockchain — the technology that undergirds Bitcoin — as a panacea for the ad industry’s $7 billion fraud problem. But just as blockchain could act as the foundation for a global cryptocurrency some day, blockchain’s use for ad fraud prevention is more aspirational than actual at the moment.

This is not to dismiss blockchain; it’s a great technology with a huge amount of promise. But technologies take time to mature. When it comes to ad fraud, blockchain just isn’t up to the task – at least, not yet.

The promise of blockchain to advertisers

Blockchain is a decentralized, immutable online ledger that can act as a single source of truth for transactions. If you buy property, for instance, the deed could be held in the blockchain with no danger of losing the paper or computer-based records. And there are other benefits to the technology. In theory, at least, you don’t need a middleman to verify the transaction, and if someone else claims to own the deed, there is that single source of truth.

The same could apply to an advertising transaction. Similar to ads.txt, blockchain offers a detailed history of all intermediate transactions for every impression that is bought or sold. In theory, blockchain could also help with discrepancy resolution and payment tracking.

With blockchain, advertisers could see exactly where their digital dollars go. If they buy an ad from a publisher, the purchase record would be evident. Blockchain could provide a clear record of payment for every transaction, which would make fraud much harder to pull off.

The reality of blockchain’s limitations

So far, so good. But the above scenario assumes that blockchain works in real time. It does not. The fastest blockchain transaction takes 1.5 seconds. A recent analysis showed that the average Bitcoin transaction, for instance, takes 78 minutes. Digital advertising transactions require a 10-millisecond response time. Blockchain is nowhere near capable of providing that.

Such relatively slow speeds are fine if you’re putting the deed to your house in the blockchain, but they won’t work for the lightning-fast world of delivering digital advertisements.

To be clear, blockchain is a great tool for validation after the fact, but to prevent ad fraud, you need to operate in real time. A system needs to make a prevention decision not to buy fraudulent media. Blockchain can be useful to fight fraud because of its ability to record and time-stamp every transaction for future reference. Since that doesn’t happen in real time, marketers could use blockchain for payment remediation after the fact.

The main reason that blockchain is so slow is that it requires a tremendous amount of computing power. Since blockchain is decentralized, it’s unclear who in the advertising ecosystem is going to fund the new computing required to make blockchain fast enough to pull off real-time analysis. This is a big-dollar hardware problem.

Still many issues to be ironed out

Blockchain’s pokey transaction speeds are the reason why the IAB Tech Lab hasn’t endorsed it as a fraud-prevention technique. It’s possible that will change. Quantum computing could solve the speed problem but at the same time render blockchain obsolete by making seemingly unalterable ledgers suddenly alterable.

If the industry can help address blockchain’s current limitations, it could very well do what many have promised — act as an open-access ledger for digital ad transactions that promotes visibility and reduces fraud. But most industry observers believe there are too many players in the advertising ecosystem who currently benefit from transactional opacity to create a groundswell of support for a blockchain solution. Unless the industry unites to challenge the duopoly, it probably won’t happen anytime soon. 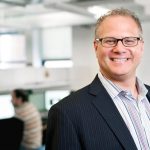 Mark Pearlstein is CRO at DoubleVerify. Mark has over 12 years’ experience selling enterprise software, ad tech, and internet advertising. Most recently Mark served as SVP Business Development & Sales at Ringleader Digital, a mobile ad serving platform and network focused on the mobile ecosystem. In that role, he worked closely with ESPN, Microsoft Advertising and AccuWeather. Prior to Ringleader, Mark held key roles at Entriq, Motive, Broadjump, and Oracle. Mark earned his BA in Philosophy from Brandeis University.