A new report from Advertiser Perceptions confirms the complementary nature of TV and digital video as advertisers pour more money into sight, sound and motion strategies. According to the report, 51% of advertisers intend to increase spending on video – up 10% from a year ago – relying on TV principally for awareness and digital video primarily to further purchase intent and generate sales. They’re spreading their advertising across the growing universe of video platforms, but favoring the online venues that can deliver larger audiences. And they’re defining premium video by audience engagement, not production format or quality.

“The video expansion is not an either-or proposition,” said Andy Sippel, executive vice president at Advertiser Perceptions. “Advertisers are expanding their investment to follow engaged viewers onto as many platforms as possible.”

Increased spending will come primarily from larger advertising budgets. While one-third of advertisers plan to reallocate a portion of their linear TV budgets – taking TV’s allocation to 21% vs. 23% a year ago – most of that will go to advanced TV solutions. And although social media and video sites are getting the largest share of digital video budgets – 17% and 16%, respectively – advertisers are most optimistic about streaming services. Net optimism (advocates minus detractors on an index of 100) for streaming services is 42, vs. 39 for social media sites and 35 for video sites. 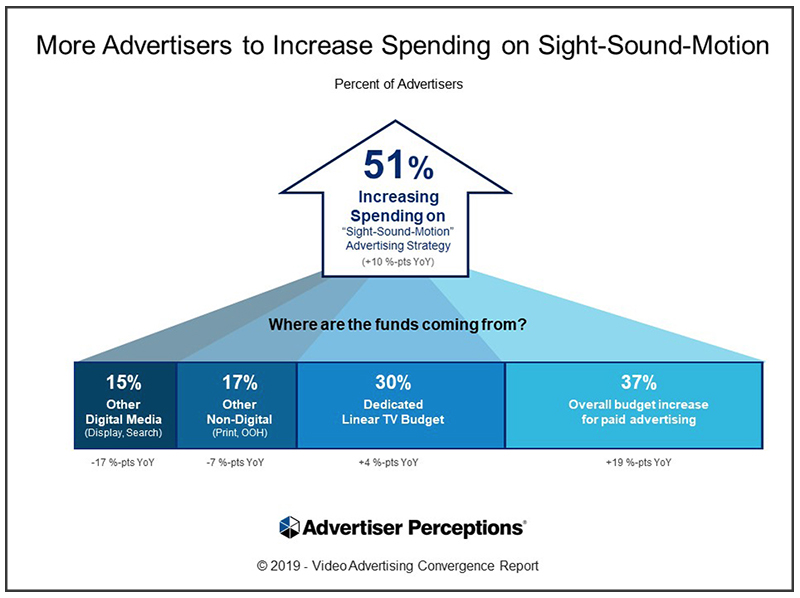 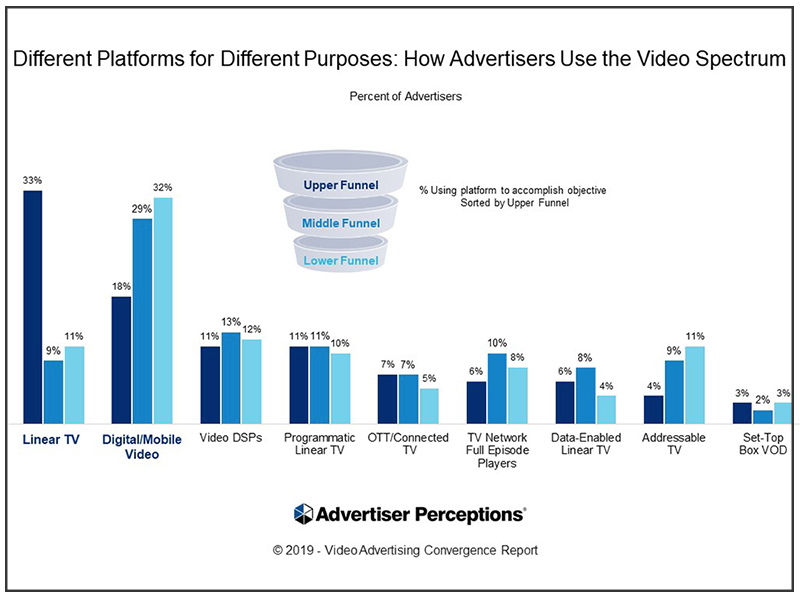 Advertisers are defining premium digital video according to audience rather than channel or format, although 76% of advertisers agree it’s professionally produced content. Specifically, 79% define premium as content viewers return to regularly, 76% as content their target audience seeks out, and 71% as content that contributes meaningful reach to their media plans.

“It’s about inventory,” said Sippel. “The more you have, the greater the reach and targeting you can provide. And the more you can do for an advertiser’s media plan.”

Fraud and safety online continue to worry advertisers, though not as acutely as a year ago. In terms of issues that will cause them to avoid spending with a media brand, 58% of advertisers cited brand safety and 49% said viewability. Other top issues: data privacy (48%), non-human traffic (43%) and lack of ad placement verification (42%).

Similarly, advertisers confront challenges to executing campaigns. The complexity of the video advertising ecosystem daunts 42% of advertisers, as does the inability to target specific viewers (41%) and integrate first-party data (37%). Meanwhile, lack of standard measurement (57%), de-duplicating audiences (51%), and inability to plan media buys seamlessly (46%) still make it tough to succeed in cross-channel video advertising.

Solving the measurement issue could accelerate cross-channel programmatic buying, which currently accounts for roughly half of digital/mobile video and OTT/connected TV, and more than a third of Linear TV spending. Fully 85% of advertisers say they will increase programmatic buying across screens when the service is more readily available and verifiable.

“When they release the dam, there will be a flood of money into programmatic video,” said Sippel. “Advertisers are just waiting for predictable, reliable and measurable audience across screens.”

Despite their intensified commitment to sight, sound and motion strategies, advertisers remain paradoxical on buying all things video together. On one hand, 66% want media providers to bring multiplatform solutions they can access with one buy. On the other, only 46% (up from 40% a year ago) have one team buying all things video. Still,  50% say they’re planning to combine TV and digital video teams, the same number as a year ago.

“Holistic buying is a people issue, not a business issue,” said Sippel. “Everyone’s looking across the spectrum, but the TV buyers want to keep that money in the TV ecosystem and the digital buyers want to move more of it online.”

Advertiser Perceptions interviewed 302 advertisers (59% agency, 41% marketer) who are 100% involved in TV and digital/mobile video in October 2018. More than half (51%) were senior vice president or higher, while 37% were director-supervisor level and 12% were planners or buyers.

Choosing the Best Malware Reddit Application For Your Computer