Here’s a prediction for 2019: Facebook advertising will be even more competitive.

This means more advertisers can use the platform profitably. However, as the playing field becomes increasingly level, advertisers lose one of their key competitive advantages: better ad tech.

As ad tech becomes less and less of a competitive advantage, advertisers have to find a new way to stay ahead of the pack.

So what’s left? Creative. In particular, the type of breakout creative that delivers outsized results. Not just 10x ads, but 100x ads. 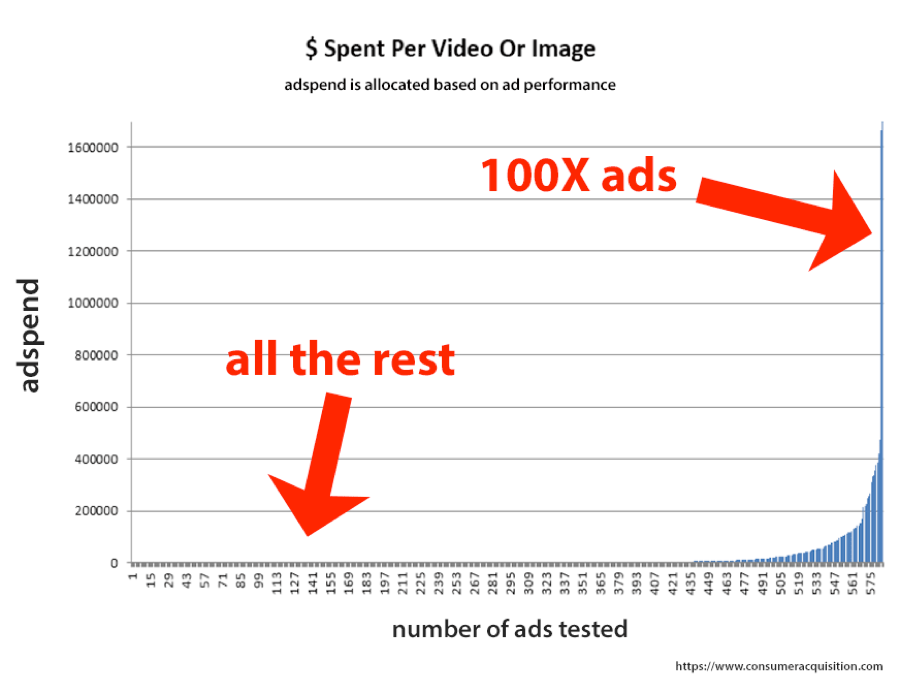 The vast majority of new ad creative will fail. This is why we need a systematic approach for finding breakout, 100x ads.

You can’t recognize this type of super creative just by looking at it. This isn’t an issue of “I think this ad will do better.” Opinions don’t matter – performance matters. Breakout creative often doesn’t look like anything terribly special until you put it into a live campaign and look the reports. Then, that one humble little ad starts to look very different from all the rest.

This is why creative can be such a competitive edge. But only if you know how to find the 100x ads.

To find the 100x ads will require you to develop a lot of ads. You’ll also have to test the bejesus out of them. That’s the other challenge with creative testing: 95% of new creative will fail to beat the current best-performing ad (aka “the control”).

That means you don’t need one new ad. You need twenty. Because you don’t need just any ad – you need an ad that will outperform your current winner. You need the 5%. So you have to create twenty ads to find that one gem.

Let’s not forget about ad fatigue, either. As you know, ads don’t last forever on Facebook. And the bigger your budget, the faster they fade. For advertisers spending $1 million or more per month, ads can fade in as little as four to seven days.

Take that into consideration, and now you need twenty new ads each week.

Impossible? No. It just requires the ability to scale up creative development and testing in a way that most advertisers aren’t doing. We call it Quantitative Creative Testing.

Quantitative Creative Testing is not quite a/b split-testing, and not quite multivariate testing. But it is specifically designed for creative production for Facebook ads and Google’s Universal App Campaigns (UAC).

Here’s how to do it.

There are two flavors of ad creative tests: Concepts and Variations.

Here are the key differences: 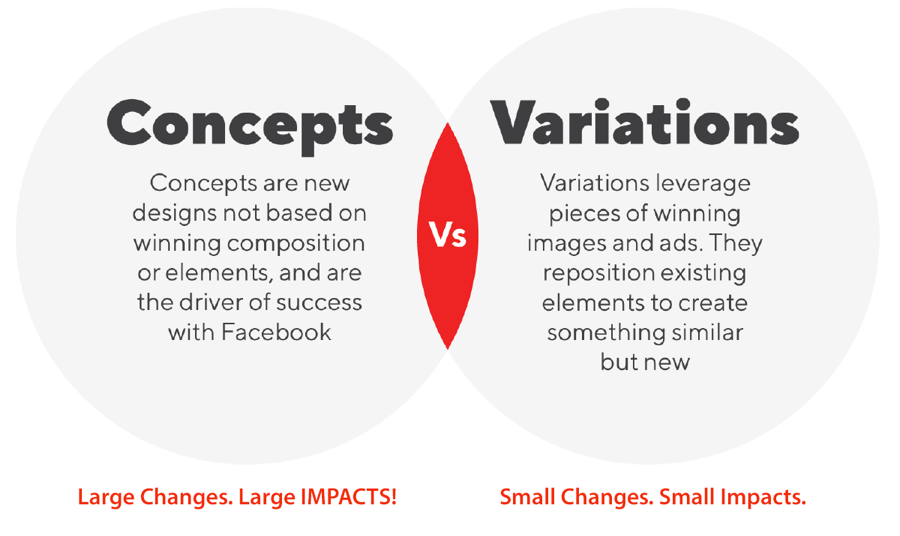 We break the Quantitative Creative Testing framework into five phases, and the general idea is to spend about 80% of the time optimizing the best ads and creating new variations. This limits the amount of non-converting spend, and also lets us prototype and iterate new ads rapidly. The remaining 20% of the time is spent with new concept ideation – big “pie in the sky” ideas that often fail but sometimes generate a 100x ad.

Before we start creating new ads, it’s smart to see which ads competitors are running, and which of their ads appear to be successful.

To do this yourself, set aside an hour or two and identify your top ten competitors for Facebook ads. You can conduct a creative audit from their Facebook page if you look under the “Info and Ads” tab. This won’t tell you how well the ads are performing, but it shows you what ads the company is running. Paid competitive tools like Social Pita can provide deeper performance analytics.

Take notes and screenshots of what you find during your competitive analysis, whether it’s done on Facebook or with a paid tool. Look for ideas you could use in your own ads.

It’s worth your time to do this background work. It will optimize your ad spend because you’ll be creating ads that are similar to other companies’ best-performing ads. It will also give you a good creative framework based on what companies like yours are doing. 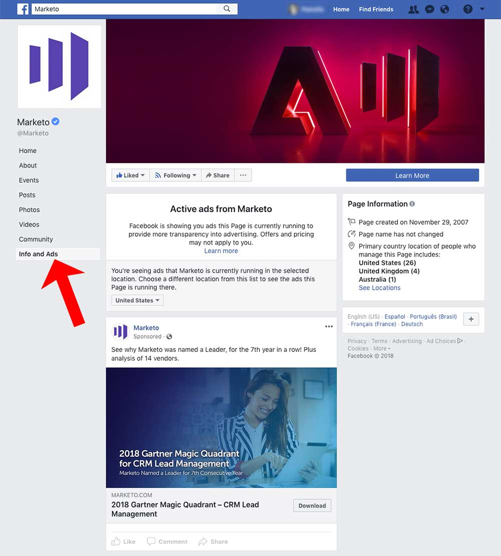 Facebook recently added the “Info and Ads” tab, which lets anyone see which ads a page is running.

Now we’re into the actual creative testing, but we’re going to start carefully. Simple variation testing is where we basically tear apart ads that are already working and find out which elements of those ads are driving results.

This minimizes the financial risk of inherent in testing, and it will also give us some best practices to apply to new ad concepts later.

Here are a few of the elements we like to test:

Once you know which element or elements are the primary performance drivers, then you have some very valuable information. It can be used going forward for ad variations and for new ad concepts. This variation testing basically gives you a “best practices” template for future ads.

Advanced Variation Testing takes everything we learned from competitive research and ad elements testing and uses it to start building new ads.

As you know, there’s an awful lot to test. Here are some of our favorites:

It might seem like a lot, until you look at real ads and see all the possible combinations. 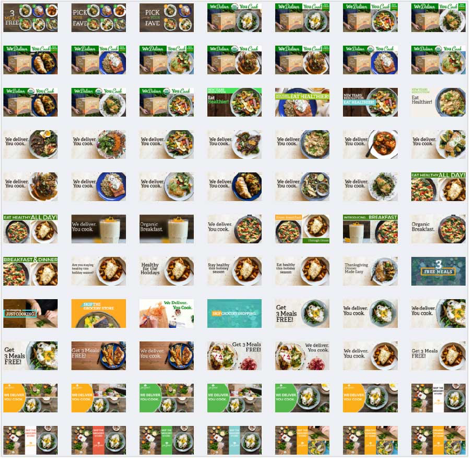 These tactics leverage Facebook’s “Create to Convert” feature that lets advertisers take still images and convert them into videos.

This is where we try to capture lightning in a bottle and produce a breakout, 100x ad. About 95% of ads will fail to outperform your existing ads, and some of those losing ads will fail hard. To minimize the losses, usually, about 20% of creative work is focused on new concepts.

To develop these new concepts, you’ll need to:

This is the full process of Quantitative Creative Testing. Clearly, it’s a lot of work. Not every advertiser has the bandwidth to develop this much creative, or to manage this many tests. But it can be done, and it works. It can definitely help your Facebook ads regain a competitive edge.