By Frank Strong, founder and president of Sword and the Script Media, LLC

It’s very difficult to escape politics these days. Political messages have permeated every possible medium from the mailbox to social media and everywhere in-between. Most of it is shouting, and there is very little listening.

That’s the backdrop for brands considering taking a public stand on a political position. To be sure, I do not simply mean issues where there’s a clear business correlation. Technology companies opposing (or supporting) the repeal of net neutrality, or an outdoor great marker supporting the environment are straightforward business cases for taking a position.

That’s not what we’re talking about here and in my observation, there are more and more voices urging brands to take a political position. A study by Edelman found “nearly two-thirds (64 percent) of consumers around the world now buy on belief, a remarkable increase of 13 points since 2017.” The ensuing narrative has been that “taking a stand is no longer an option for brands.”

Yet asking people if they buy on belief is not the same thing as asking people if they’d buy from a company with a public position on a political issue with which they disagree. There’s a level of granularity that needs to be explored and a new survey that wrapped up just before the mid-term elections in 2018, aimed to do that with a deeper line of questioning.

Some of the key findings include the following:

3) The context of the issue matters. If a brand takes a political position that respondents agreed with, about half (48%) were more likely to make a purchase while the other half (47%) were neither more or less likely. The context clearly matters, because if a brand takes a position with which they disagreed, the numbers swung the other way: 53% were less likely to make a purchase and 40% were neutral.

4) Women may have a stronger reaction than men. An analysis by gender shows respondents that identified as women (60%) were less likely than men (44%) to make a purchase from a brand that took a position with which they disagreed. Interestingly, men were more likely say brands shouldn’t get involved in politics, however, the data suggests they may be less likely to act if a brand does pick a political side.

5) The mitigating effects of loyalty, quality, convenience, and price. If the quality, convenience or price of a product or service is better than the competition, respondents said they would still buy from a brand even if they took a political position with which they disagree. Recall that 53% were less likely to make a purchase if a brand took a position with which they disagreed, however, when mitigating factors were introduced, that number fell in the following ways:

Do these findings suggest brands can take a take? The data is mixed but in my assessment, it seems to suggest it’s risky, but not impossible. Certainly, brands should not delve into the fray without careful consideration.

There are many variables from a company perspective to consider as well. For example, most brands think instinctively about the customers and potential for loss of sales, but employees matter too. If the workplace is divided over an issue, any stand could be disruptive.

Efforts to understand employee leanings could be perceived as intrusive, or simply draw inaccurate conclusions. For example, survey bias – where people tell you what they think you want to hear – exists in all surveys (including this one) but the effects could be exaggerated if an employee believes a survey answer could be tied to their livelihood.

Do We Really Want Brands to Take a Stand?

The political environment is so polarizing today, it’s hard to think outside of the current context. Yet we must, because history shows political winds change with time, and a brand that takes a position you agree with today, might also take one which with you disagree more viscerally in the future.

More importantly, while money has clearly had a greater impact on politics, the inherent conflict of a brand’s public political viewpoint and revenue is pandora’s box. Do we really want business striving to profit from political positions?

There’s an old saying in branding that you zig when everyone else is zagging. While many brands are debating which side to take, there are more than just two answers. For example, a third option is to find ways to bring people together. The caveat is that it should be considered a civic opportunity and not a business opportunity.

The entire study can be found here – New Study: Should Brands Take a Public Stand on Politics? and is freely available for download in PDF format. 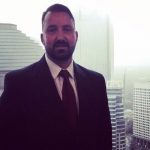 Frank Strong is the founder and president of Sword and the Script Media, LLC, a veteran-owned PR and marketing agency based in Atlanta. Find him on Twitter @Frank_Strong.