A case on Audible, with Facebook Playable Ads by MakeMeReach & Undertone

Networks like Facebook are getting more crowded with ads every year, and advertisers worldwide are asking themselves what it takes to stand out.

With the launch of Facebook Playable ads in early August 2018, Audible France was one of the few advertisers lucky enough to gain access to the new ad format, still in beta. This innovative advertising solution allows users to engage with the experience of an app or game in their Facebook news feed, before clicking through to download it from the app store. Early signs suggest Facebook Playable Ads offer the cut through innovative advertisers have been looking for, by taking interaction and engagement with the ad to a whole new level!

Audible France was one of a handful of non-gaming brands to gain access to the beta, which they trialed through the MakeMeReach platform. As a leading Facebook Marketing Partner (FMP), with a long track record of success and innovation dating back to 2009, MakeMeReach, a sister company of Undertone, a leader in synchronized cross-platform digital branding, is able to regularly offer select clients access to exclusive Facebook betas.

For Audible France, the aim of the Facebook Playable Ad campaign was to promote a series of audiobooks, and drive downloads of the Audible app. With the invitation in the ad text to “discover the audiobook by scratching on the image”, the ad built intrigue of what might be waiting for the user behind the question mark. By rubbing away the orange background, the user discovered an image of the audiobook offer, as well as some detail on the author and content. This was followed further down by a bold button encouraging download of the app.

One of Audible France’s major findings from the initial test was that users who installed the app, after having engaged with the ad, were more likely to make purchases in the app later on. In fact, compared to their average conversion rate of 5.32% for classic Facebook Video Ads, in the Playable Ads test, 6.15% of app downloaders went on to make an in-app purchase.

Added to this success, the client was also impressed to see a 16% lower Cost per Purchase (CPP) for the Playable Ads test, compared to the initial objective they had set for the campaign.

“Having the opportunity to test Facebook Playable Ads, while still in beta, was very valuable for us. The initial results are promising and suggest that this interactive ad format can really drive higher value app downloads, even for non-gaming businesses like ours. We enjoyed discovering the new format alongside our partner MakeMeReach” – Constanze Stypula, VP & Country Manager, Audible France. 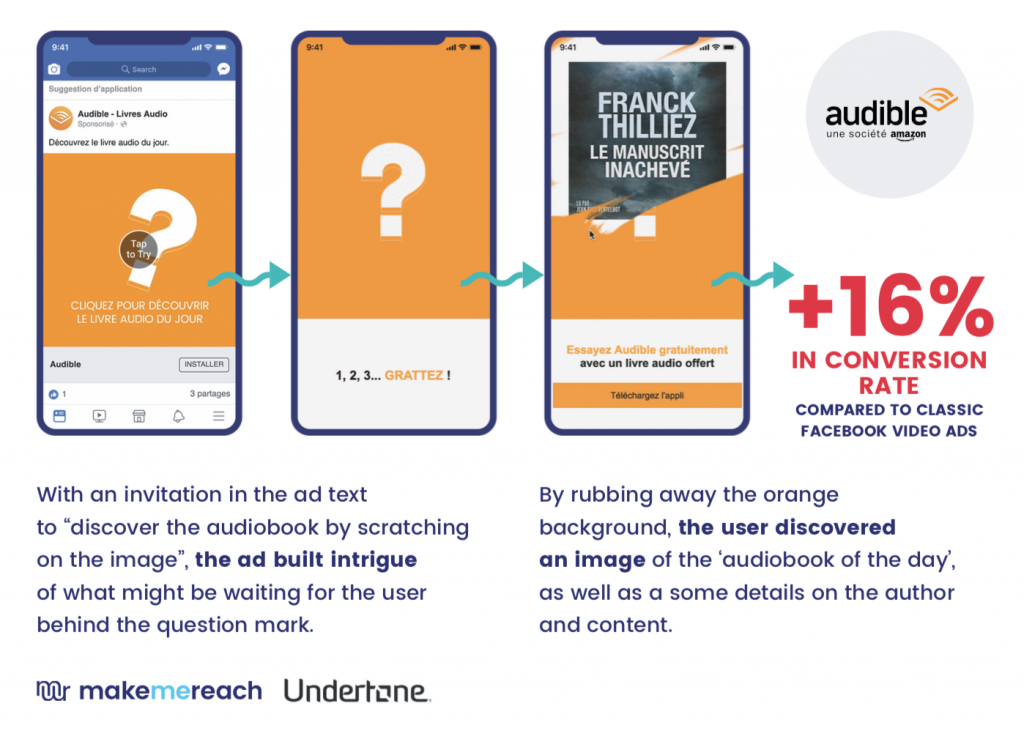