In 2018, programmatic ad spend is projected to reach $39.1 billion In the United States alone, according to eMarker. This makes North America a prime target for digital ad fraud. Global ad revenue lost to fraud is estimated by Juniper Research to be $14.2 billion in 2017 and $44 billion by 2022.

“Fraud tends to follow money, so it’s no surprise that North America has the highest percent of fraudulent traffic – a lot of money is being spent here on digital advertising,” said Fraudlogix CEO, Hagai Shechter. “Fraudsters are making a quick and easy buck at the expense of advertisers. At this point, it’s easy money with very few consequences.”

The report defines fraudulent ad traffic as ad impressions that were generated by bots, compromised devices, and other nefarious means. It includes the percentages of fraud found in real-time bidding (RTB) advertising traffic during the month of September 2018. Fraudlogix’s pixel-based technology regularly monitors data from 640+ million unique users, 1.2 billion unique devices, and 12 million URLs monthly. Fraudlogix maps the latest devices, locations, bots, behaviors, and hacking tactics that are being used by digital fraudsters.

A copy of the report can be downloaded from here. 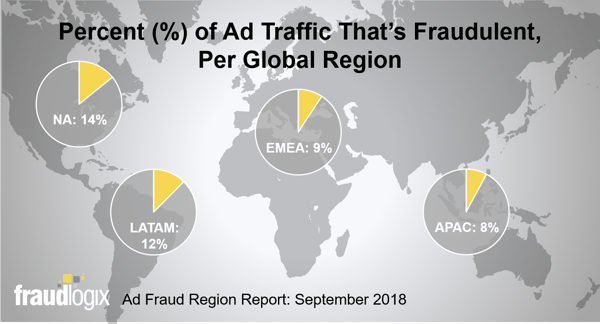 Fraudlogix is an online advertising fraud detection company founded in 2010 by industry veterans with a deep understanding of the digital ad ecosystem. It specializes in ad fraud solutions for desktop, mobile, in-app and video environments for the programmatic and affiliate spaces. Today, Fraudlogix monitors data from over 640 million unique users, millions of websites and 1.2 billion unique devices monthly. Visit www.fraudlogix.com for more information.

What is the difference between N95 masks and medical masks, can they filter bacteria and viruses?