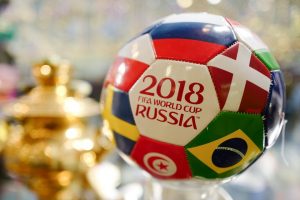 Adthena, an AI and machine learning-powered search intelligence company, today announced a new study examining US search activities during the 2018 FIFA World Cup. For the study, Adthena analyzed more than 40,000 paid ads – across desktop and mobile – during the event from June 25-July 10, 2018.

Nike.com and Fanatics.com Dominate England Jersey Search in the U.S.

Per Adthena’s findings, Nike.com and Fanatics.com dominated market share in the US around search terms having to do with purchasing an England jersey — one of the most popular teams and a semi-finalist at the event.

“As the manufacturer of the England jersey, Nike clearly made a heavy push in search around the England shirt, and their efforts seemed to have really paid off,” said Ashley Fletcher, VP of Marketing, Adthena. “However, what is really surprising is how Fanatics.com was able to beat out Amazon.com, one of the foremost retail giants worldwide. A lot has been made about Amazon’s power as a search force, so to see them beaten relatively easily in regards to the England shirt is definitely an upset.”

With the rise of streaming services, some of the most contentious search battles emerged around the “Where can I watch the world cup” term per Adthena’s findings.

“Streaming was an incredibly exciting area to watch in search given this was really the first World Cup where it played a significant role in how fans watched the event,” said Fletcher. “And the search competition definitely didn’t let us down, with two of streaming’s ‘heavy hitters’ Fubo.tv and Hulu.com really vying for position, with Fubo.tv largely edging Hulu.com for most of the event.”

“The ticket space was one of the key areas that search professionals were focusing on during the event,” said Fletcher. “Stubhub.com and Viagogo.com really emerged as the only two large competitors throughout the World Cup in the US, with Stubhub.com managing to retain a pretty large market share throughout even if it was eventually surpassed by Viagogo.com in spots.”

The air travel space was one of the most competitive areas in search during the World Cup, with Cheapoair.com, Justfly.com, Flighthub.com and others engaging in a fierce battle for supremacy on the “Cheap flights to Russia” search term.

“Air travel was again one of the more intriguing areas to watch in search around the World Cup, given Cheapoair.com and Justfly.com were able to edge out bigger competitors than Kayak.com,” added Fletcher. “This definitely points to the fact that companies that have a strategic approach to search can find significant success, especially during large events.”

Per the study, the search competition surrounding the term “Rent a car Russia” was some of the most contested in the US market.