Fraud targeting mobile app marketers is evolving faster than ever. What once took fraudsters six months to develop can now take weeks or even days. The bad guys have gotten smarter, adapting much more quickly to anti-fraud measures.

In late 2017, Forrester reported that mobile fraud is among marketers’ most pressing concerns. However, solid, data-backed information about mobile fraud is difficult to find. With fraud rates on the rise, the time has come to share some deep, actionable insights in order to help reverse this disturbing trend. In this study, AppsFlyer explores the current impact of fraud on the market and offers global findings and insights by category, country and platform. 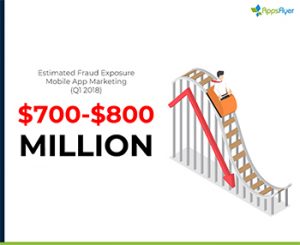 Fraud rising. Over Q1 2018, mobile app marketers were exposed to 30% more fraud (as compared to the 2017 quarterly average), reaching $700-$800 million worldwide. The share of fraudulent installs has also grown by 15%, tainting 11.5% of all marketing-driven installs.

Fraud comes in waves. When new protective measures are introduced, fraudsters adapt, which leads to new measures, and the cycle continues. Fraud has become a high stakes arms race as both sides are becoming increasingly sophisticated.

Bots are now the most dangerous threat. In September, we saw new kinds of bots emerge. By February, bots replaced device farms as the most popular form of attack responsible for over 30% of fraudulent installs.

Many apps are exposed. Fraud is not just about a few large apps targeted by advanced attacks. In fact, 22% of apps have over 10% fraud, while no less than 12% are significantly exposed with at least 30% fraud.

Shopping apps, with their high CPIs and huge scale are the most heavily hit vertical, with $275 million exposed over Q1 2018. Android is more vulnerable to fraud, but iOS is also a target. With greater difficulty perpetrating device fraud on iOS, fraudsters resort mainly to click flood, where iOS is well ahead of Android. In all other types of fraud, Android rates are much higher.