As The Oscars Approach Get Out, Dunkirk, and Ladybird Generate the Most Search Buzz.  Special Spotlight: Black Panther

Hitwise charted consumer searches for the best picture nominees over the last year, and Get Out, Dunkirk and Ladybird were the big winners in terms of generating online interest. 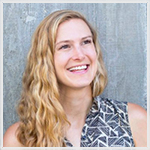 “Most of the best picture nominees were released in the months before Oscars season, and therefore they ended up competing for attention against one another,” says Rochelle Bailis, global director of content at Hitwise and who conducted the study (pictured left). “The only nominee who stood out during the resent pre-Oscars period was Ladybird. Get Out and Dunkirk appeared to benefit from earlier releases, although it remains to be seen how this will affect their chances at the Oscars.” 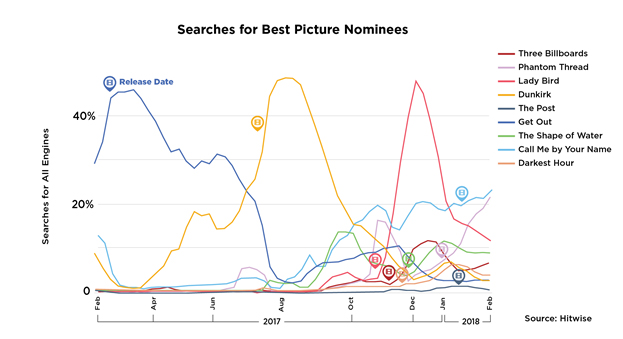 While most movie fans skew young, Oscar fans index even more heavily towards 18-24 year-olds— and they are twice as likely to be students than regular moviegoers.

“Hollywood feared for years that they were losing their grasp on this key age group due to increased competition from streaming sites like Netflix. In reaction, we see saw Hollywood doubling down the superhero “sequel machine” of box-office-safe hero movies. However, young people’s interest in this year’s Oscars suggests Hollywood may have other options besides getting caught in an endless cycle of hero sequels.

“Our data suggests that 18-24 year olds are especially interested in the Academy Awards and Oscar nominated movies this year,” adds Ms Bailis. “This may be contributing to the success of more original movies like the genre-bending Get Out, or the teenage comedy-drama, Ladybird. While hero movies remain a successful franchise, the thirst for original stories amongst the youngest generation appears strong as well.”

Both general movie lovers and Oscars fans over-index for Asian-Americans. African-Americans are consistently under-indexed for both (note this data does not include the opening weekend for Black Panther).

Movie studios have recently focused on Hispanic audiences, who are more likely to go to the movies 6 times a year or more than any other audience.

“Although we see the overall Hispanic population under-indexing in movies and the Oscars, this story changes dramatically when you drill down on second and third generation audiences,” says Ms Bailis. “These groups are not only interested in movies, they are particularly engaged with the Academy Awards. This suggests a great opportunity Oscar-worthy films to be marketed to second and third-generation Hispanic audiences.”

Although it won’t make it into the 2018 Oscars lineup, Black Panther was such a box office hit Hitwise includes a few quick stats from the last week:

Black Panther was the 7th most searched entertainment-related term by movie fans** over the past 4 weeks.

Searches for “black panther soundtrack” shot up 304% the day the soundtrack was released (2/9) compared to the day before.

The connection between moviegoers and music is measurable: movie fans are 217% more likely to visit Music industry websites — in fact, music is their most “over-indexed” industry visited compared to all other categories.

“Black Panther generated an unbelievable amount of buzz over the weekend. Terms like ‘black panther show times’ spiked as movie theatres across the country sold out of seats, and ‘black panther box office’ searches climbed as consumers investigated the record-breaking numbers behind the film’s first weekend,” says Ms Bailis.

“Movie lovers are purists, especially Oscars fans — they don’t want to compromise the cinematic experience with products or brand placements. They are, however, receptive to seeing advertisements before or after the movie-viewing experience,” says Ms Bailis. 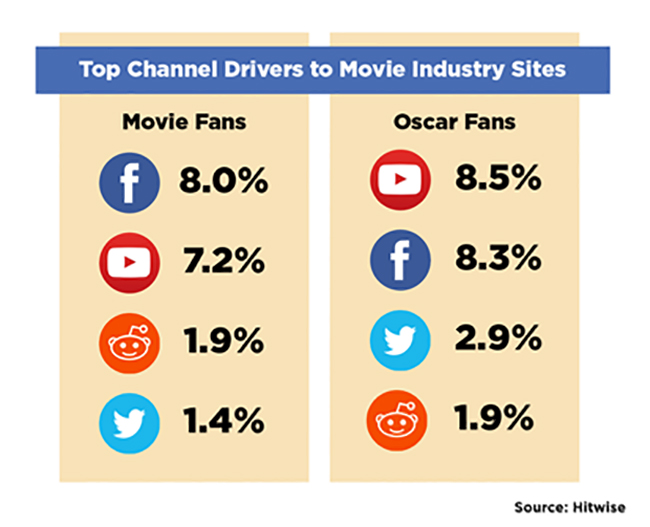 “Based on the behavior of Oscars fans online, we predict YouTube will be the most critical social channel for engaging Academy Awards fans in 2018,” Ms Bailis says.

Variety.com is very popular with Oscar fans, pulling nearly 5% of all their visits to entertainment sites — for general movie fans it pulls less than half that engagement.

“Although other publishers, like the Hollywood Reporter, are ranked similarly for moviegoers and Oscars fans, the Oscars audience in particular is drawn to Variety as their first source of entertainment news. Meanwhile general movie fans are drawn to sites like Fandango, where they can check showtimes and buy tickets,” says Ms Bailis.

*Source: Oscar fans audience is based on people who visited Oscar.com or searched for variations of “Oscars” or “Academy Awards.” General movie fans segment includes people who visited fandango.com, rottentomatoes.com, imdb.com or searched for movie or film showtimes, tickets, “near me” etc. Data was pulled over four weeks ending February 10th, 2017. Best picture nominee movie searches were charted from 02/11/2017 through 02/10/2018. Black panther searches were charted weekly for weeks ending 2/10 and 2/17, and daily on 2/8 and 2/9.

*Hitwise insights are derived from an online behavioral panel of over 8 million individuals tracked on over 20 million websites across 500 million monthly search queries and from over 100 million in-market shoppers. Qualitative consumer insights are added to the mix based on up to 60,000 attributes then made addressable across 650 million devices.