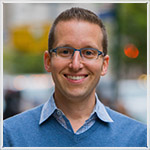 Forensiq, a leader in ad fraud detection and prevention, today, announced its partnership with Yeahmobi, to help curb the effect of advertising fraud across its mobile ad platform. Yeahmobi is an intelligent mobile advertising platform helping organizations reach global growth.

While Yeahmobi initially had the capabilities to detect invalid web traffic, it was in need of a more equipped suite of services to help provide the highest traffic quality for its customers. With the help of Forensiq, the company was able to leverage its traffic quality and reason codes tools to make significant improvements in order to successfully block all fraudulent sources.

“We’re thrilled to have been able to utilize our ad fraud detection services to help make a significant impact on Yeahmobi’s traffic reporting. Invalid web traffic continues to be a thorn in the side of many businesses, costing them thousands of dollars every year,” said David Sendroff, CEO of Forensiq (pictured top left). “Helping companies deliver transparent reporting is our overall goal, and as fraudsters continue ramping up their efforts to attach, Forensiq will continue to prevent them.”

“Fraudulent traffic wastes an enormous amount of ad spend. We believe anti-fraud efforts will boost the development of mobile marketing services, said Daisy Wu, VP of International Business and Strategic Partnerships at Yeahmobi. “With Forensiq’s help, Yeahmobi is doing its part to establish a clean and transparent mobile marketing environment.”

Moving forward, Yeahmobi will turn to Forensiq to help ultimately eliminate fraudulent traffic from its platform in order to provide the most transparent reporting for its clients. 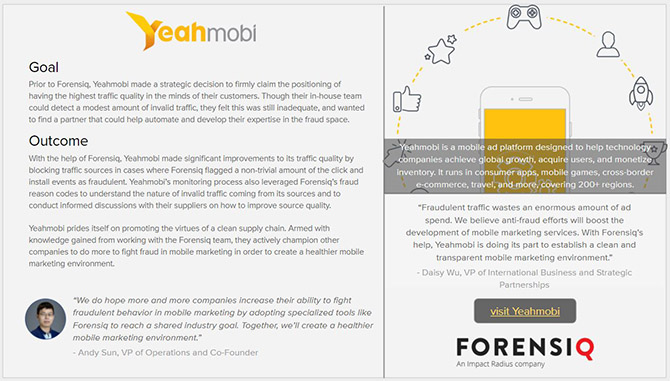 Forensiq, an Impact Radius company, is a fraud detection platform that has developed a series of solutions to fight online click, conversion, and ad fraud. Forensiq was founded in 2010 and is headquartered in New York City with offices in London, Silicon Valley and Cape Town. The company has won three LeadsCouncil LEADER Awards, including Best-In-Class for Fraud Detection as well as DM News Most Innovative Marketing Tech to Watch in 2016. To learn more, visit www.forensiq.com.

Yeahmobi is an intelligent mobile advertising platform designed to help mobile technology companies reach global growth, acquire active users and monetize inventory. Headquartered in China, it has offices in Japan, US and Germany.