ADOTAS – Retailers have been hard at work over the past few years exploring the synergies between the well-established, high-ROI email channel and the dynamic, highly viral social media channel. The evolution of this partnership has moved so quickly that already some email-social tactics are near universal adoption while others remain nascent and experimental, only recently being seriously investigated.

Community Links: Email is a key tactic for raising awareness of and driving traffic to brands’ social media pages. Our newly released Viral & Community Links in Email report revealed that 88% of the top online retailers now include links to their pages on Facebook, Twitter and other social media in every promotional email they send. That’s up from 75% in 2010 and just 30% in 2009. 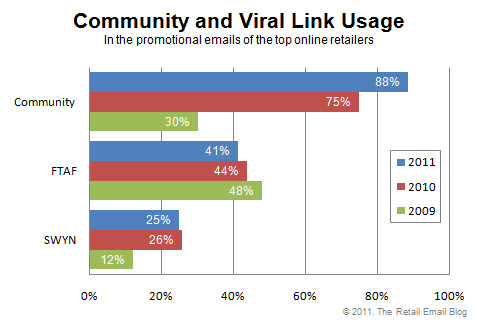 Contest and Sweepstakes Host: Facebook has almost become the de facto host of all contests and sweepstakes that major retailers hold. And promoting those contests in their emails has become standard practice.

For instance, Hallmark promoted their “Blank Is a Special Occasion” contest in a July 19 email, asking subscribers to share an “any-day moment” that is a special occasion to them on Facebook. And Ann Taylor promoted their “Monday to Friday Style Sweepstakes” in a July 17 email, giving folks a chance to win a new wardrobe.

Share with Your Network (SWYN): Allowing subscribers to share email content with their friends and family on social networks appeared to be on the fast track to widespread adoption, but SWYN has lost all of the momentum that it had last year when it had major buzz. Our Viral & Community Links in Email report found that only 25% of top online retailers included SWYN links in all of their promotional emails. And that number declined slightly year-over-year.

Our research found that retailers were much more convinced of the effectiveness of SWYN links at the website level rather than email level, with 76% of top online retailers including SWYN links on their product pages. In most cases, marketers are probably best off being selective in their use of SWYN, using it when the content of an email is particularly shareworthy and placing the SWYN link prominently within the primary content block. For instance, this Aug. 19 email from Dick’s Sporting Goods about concussion prevention in high school sports is a great example of a compelling use of SWYN. 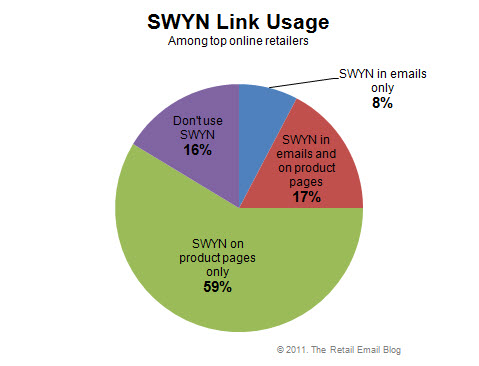 Voice of the Consumer: Including testimonials from product reviews on sites is a tried-and-true tactic for bringing a social endorsement to a product. Now marketers can also draw upon comments made via social media for use in their emails.

Event Hall: Marketers are also starting to use Facebook to host chats with staffers and celebrities. For instance, Dick’s Sporting Goods promoted a chat with Buffalo Bills running back C.J. Spiller in a July 26 email; Bed Bath & Beyond promoted one with a back-to-school panel of “college experts” in a July 12 email; and Coldwater Creek promoted one in a June 26 email, offering to answer subscribers’ style questions.

Facebook Stores: And finally, there continue to be occasional signs that F-commerce may actually be embraced by large retailers. This Aug. 22 email from the Gilt Groupe is among the most prominent examples of a retailer touting their Facebook Store.

This email included a banner to announce the opening of the Gilt Facebook Store and used a “Facebook Store” ribbon over several content block images to indicate that clicking though would take subscribers to Facebook.

Those are just a few of the ways that email and social play well together. Retailers will surely continue to push the envelope and explore new email-social synergies, looking to gain an edge on competitors and foster closer relationships with their customers.